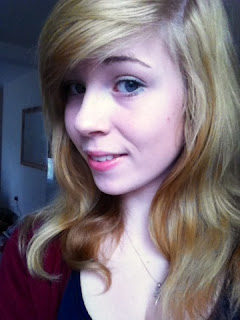 I just want to say before I get started - no, I'm not being offensive to ginger people. I love ginger people. If I were a boy, my celebrity crush would be Karen Gillan. But anyway, today I wanted to talk you through the process of getting rid of ginger hair.

In August, I decided I wanted to dye my hair red again. Remember that nice, dark, ginger colour you all complimented me on? I wanted that back, and, being lazy, I decided to order the colour off Amazon rather than go to Superdrug. Obviously, you can't get the Superdrug brand hair colour on Amazon, so I went for a ’similar’ product. In actually fact, it was completely different. When it arrived, I ripped open the box and ran upstairs immediately to try it. Forty minutes later I emerged from the bathroom with BRIGHT ORANGE hair. I'm not even joking, that colour would put Ginny Weasley to shame. 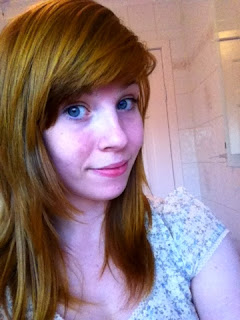 Getting rid of orange hair, it turns out, is not a simple task. I thought a nice semi-permanent ash blonde would do the trick, but it didn't even make a dent in the colour. Then I tried a light brown, and that toned it down to an acceptable auburny colour. I could live with that, and went on happily until my next shopping trip.

So, to get rid of red undertones, you will need:


Firstly, make sure you read the instructions for the toner and decide which option you will take (there are three - maintaining shade, creating deeper tones, tonal colour restoration). After doing that, wash your hair with the purple/blue rinse. The shampoo says to leave for 5 minutes, but I wanted as much red removed as possible so I left it on for 20 and wrote this blog post to kill time. After waiting for as long as you please, rinse your hair with LUKE WARM OR COOL water to keep as much of the purple pigment as possible.

Towel dry your hair and move on to the toner. Apply it as instructed, make sure it is spread evenly in your hair and wait (right now I am sitting with it on my head, writing this post) for as long as you see fit.

Wash it off with more purple rinse and leave it for another five to ten minutes.

After spending 616472794 hours in the bathroom, dry your hair and look at the result. I couldn't actually see that much of a difference straight away, but, strangely, after a few days my hair became less orangey. Once my hair had recovered from its intense washing (Touch of Silver can be a bit drying), I decided I would be brave enough to try a dye. I went for the lightest one I could find (and it had pink tones in it, to make things a little different) and set to work. After following the instructions to the letter, I rinsed and dried my hair to see the result. I don't actually have a picture to show you so I'll tell you that it was dark, but not orange; the yellow tones were still there.

A few weeks later (yes, it has taken me that long to write this post) I put on the same hair colour - this time I do have a picture (cover photo). As you can see it’s definitely lighter and not ginger. There are still some brassy tones, but they've probably come from dyeing dark hair light. I'm going to keep working at my hair; I will achieve that light, slightly pink tinted colour on the box! I think I'll be staying away from red hair dye from now on too... 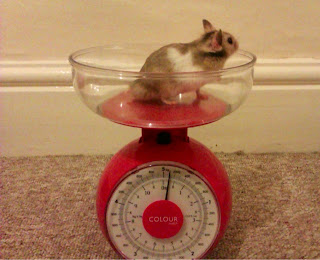 A very confused little boy being weighed for his flea drops. Old and past it